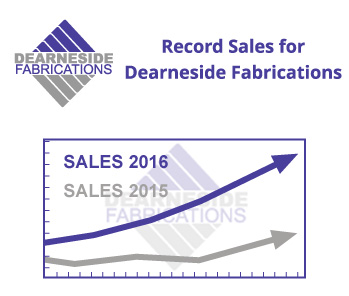 Dearneside Fabrications Ltd, one of the country’s leading Architectural Metalwork Specialists based in Sheffield are pleased to announce that over the last 12-month period March 16 the company has secured orders in excess of £16 million pounds resulting in an unprecedented forward order book of £15 million.

Turnover for the that period is £13.5 Million an increase of 58% on the previous year.
Dearneside have once again secured several large Balconies Packages within the Prime Residential Sector of Central London. Notable projects include the prestigious Merano Scheme – One of the finest developments on the River Thames.

Merano Residences is designed by one of the world’s most celebrated architects Rogers Stirk Harbour + Partners. A further landmark job is 190 The Strand for St Edward. Both schemes feature Penthouses in excess of £10 Million pounds highlighting the quality of craftsmanship which Dearneside will deliver.

The company has enjoyed considerable success in the East of London this year; notable contracts include a record £6 Million package on the huge Royal Wharf development. Other packages comprise of London City Island (2 Phases) on the Leamouth Peninsula and Chobham Manor, Stratford (the first new residential development on the Olympic Park post 2012).

Numerous landmark projects have been completed over this period including the much publicised Embassy Gardens (High End Residential Scheme surrounding the new American Embassy).

The Pinnacle building which is the centre piece of the Battersea Reach development and the Tribeca Square project (anchored in the Elephant and Castle redevelopment area of South London) have both been successfully delivered. Over recent years the company has become known as the premier Architectural Metalwork Contractor operating in large retail-lead schemes.

The company is proud to be associated with the current Meadowhall redevelopment where it is delivering a £1m + balustrade package in its home city. Adding to Dearnesides current portfolio of completed retail schemes this year are the Victoria Centre (Nottingham), Westfield Broadway (Bradford) and the Southside (Wandsworth) Centre. Dearneside Fabrications were shortlisted for the prestigious Tekla Awards in 2015 for the "Pinnacle Building" in London, constructed by London's leading residential developer, St George. The Tekla Awards showcase and reward the hard work and innovation that goes into using software to solve engineering challenges.

Continued investment this year has included the construction of our new Stainless Steel Fabrication Facility on the Trafalgar Works site following an award from the local RGF Fund. Planned investment for the next 12 months include significant work on our neighbouring Wallace Road Site. The company has strengthened its Senior Management Team with a new Operations Director, a London Regional Operations Manager plus London based Contract Managers. Dearneside is currently in advanced negotiations on several new multimillion pound packages and in the next 12 months we envisage continued growth in a manner that can be sustained in line with its current strategic business plan.